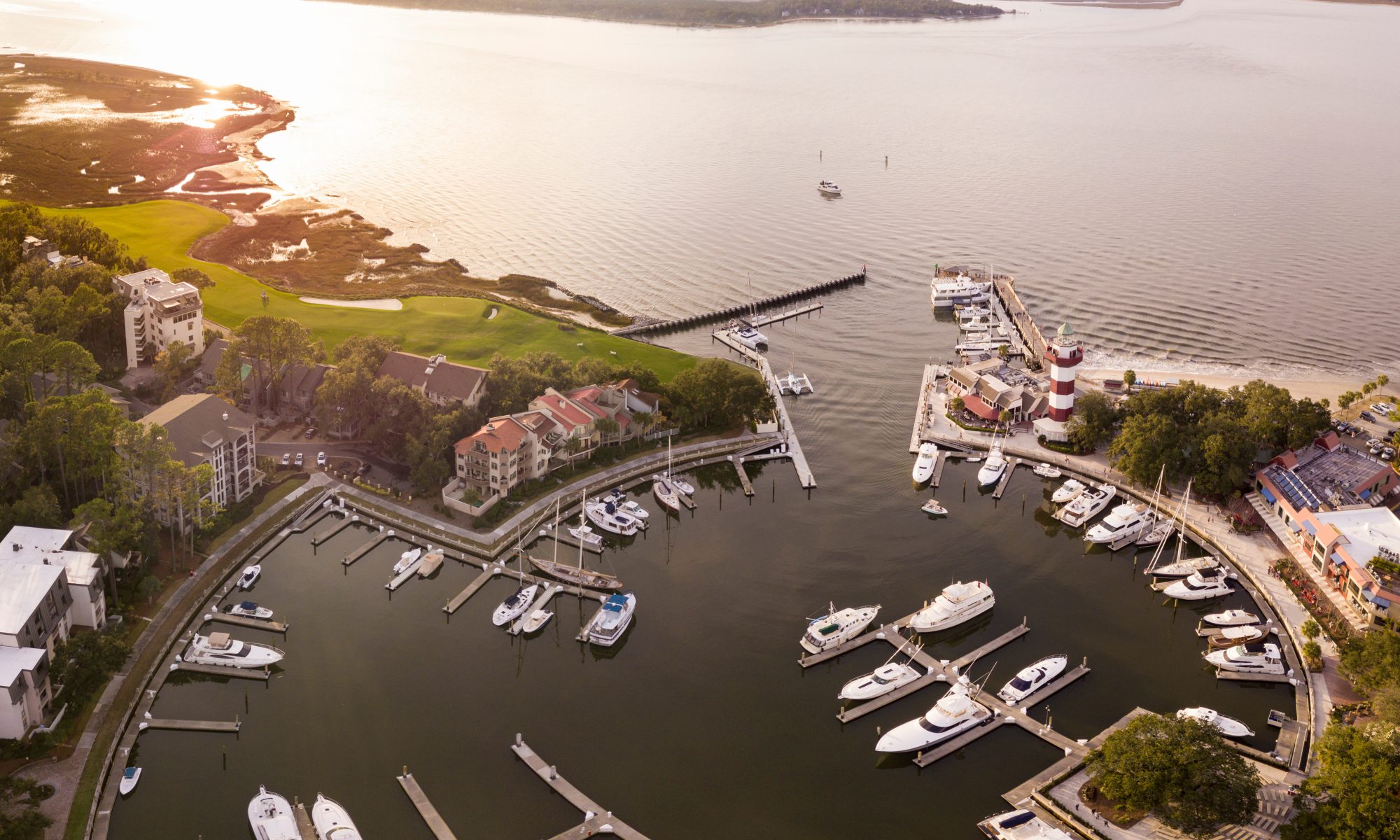 Hilton Head Island also offers visitors a glimpse into the fascinating history of South Carolina’s Lowcountry, a destination that has survived three wars, multiple hurricanes, and eras of feast, famine – and fame. In 2021, Travel+Leisure ranked Hilton Head #1 in World’s Best Islands but what lies behind the fame of America’s favorite island. Journey with us as we explore the fascinating history behind Hilton Head Island.

Evidence of life over 4,000 years ago remains on Hilton Head Island today. The well-preserved Native American Indian Shell Ring is located in Sea Pines Preserve and is the oldest known archaeological site on Hilton Head Island, and one of only 50 shell rings known to still exist today. This iconic remnant of Hilton Head Island’s history measures 150 feet in diameter and is one of the most pristine examples of a shell ring remaining in the USA.

Later, in 1335 A.D, the Native American tribes built a fortified village covering two acres along the banks of Skull Creek. This shell ring is also open to the public on a short and easy trail at the Green’s Shell Enclosure Heritage Preserve. Both these historic shell rings are today listed in the National Register of Historic Places.

Historical records show the first Spanish explorers making contact with local Native Americans in 1521, nearly two hundred years later. In 1566, the Spanish explorers built Santa Elena, a permanent settlement and Fort across the Port Royal Sound on Parris Island. They abandoned Santa Elena in 1587 to colonize further south in St Augustine, Florida. By 1663, the island was largely uninhabited except for a small population of Native Americans living off the land.

In August 1663, English Captain William Hilton set sail from Barbados to explore land granted to the Lords Proprietors, eight Englishmen to whom King Charles II had granted power of Carolina. His original landing site was the Port Royal Sound and, on gaining first sight of the headlands, he claimed the land for Britain.

In the spring of 1670, Captain Robert Sandford together with over 150 colonists, servants and slaves sailed into what is today Charleston Harbor claiming the land and naming it Charles Town, in honor of King Charles II. By 1672, the expanding settlement had relocated on a peninsula between the Cooper and Ashley River and …. the rest is history! Today, Charleston ranks as the #1 City in the USA.

On 16 August 1698, the Lords Proprietors granted John Bayley of Ireland a barony which included most of Hilton Head Island, excluding Port Royal Sound and Skull Creek. John Bayley never once visited Hilton Head Island, instead appointed Alexander Trench as an agent to sell the property. The bulk of the barony remained in the Bayley family until after the Revolutionary War.

In 1717, Colonel John Barnwell was granted 1,000 acres of land on the NW corner of the island (now Hilton Head Plantation) and became the first white settler on Hilton Head. There was still hostility between the Spanish and British and, in 1733, the City of Savannah was founded as a barrier between Spanish Florida and British Carolina.

By the 1750s, most of the plantations on the island were successfully growing indigo, which was being sold to the English – until the Revolutionary War. During the Revolutionary War (1775 to 1783), the British successfully took the city of Savannah (after failing to take Charleston!) and frequently raided the island, burning plantations and capturing slaves. Aside from rice, indigo was South Carolina’s most second valuable export, however trading with England had now ceased.

It wasn’t until 1790 when William Elliott planted the first crop of Sea Island long-staple cotton that the island once again began to gain recognition. William Elliott teamed up with neighbor Will Seabrook to pioneer a new fertilizer for the cotton crops and the Lowcountry sea islands began to boom.

The War of 1812 brought more devastation by British forces to the island, but the economy quickly resumed and, by 1860, the cotton industry on the island was lucrative with nearly two dozen working plantations.

South Carolina was the first US state to withdraw from the Union in December 1860, and, in April 1861, the Civil War began. After the Battle of Port Royal Sound in November 1861, more than 12,000 soldiers captured Fort Walker and Hilton Head Island fell into the hands of the Federal troops. Hilton Head Island became the headquarters for the blockade of the South Atlantic coast with an estimated forty thousand soldiers, prisoners of war, and former slaves settling on the island. The prospering rice, indigo and cotton plantations were abandoned, yet this victory meant freedom for the African Americans that remained.

In 1862, Union General Ormsby Mitchel built the town of Mitchelville, the first self-governing town of formerly enslaved African Americans with nearly 1,500 Gullah residents. Land was confiscated, northern missionaries opened one room schools, and homes were built for the former slaves, known locally as “contrabands of war”.

In 1864, as the troops began to move out of the area, Fort Howell was built to protect the town of Mitchelville. In 1865, the 13th Amendment to abolish slavery was signed and the Gullah community of Mitchelville were legally freed. Many moved on, others stayed on the island farming in the summer, oyster harvesting in the winter, and remaining true to the rich legacy of the Gullah culture.

Hilton Head Island returned to nature and from the 1900s to 1950s was primarily used as a destination for wealthy private hunting groups. Today, visitors to Hilton Head can walk the quiet trails leading through historic Mitchelville Freedom Park with the original site of Battle of Port Royal, historical remnants of the town and Fort Howell, and access to an off the beaten path beach overlooking the passage taken by Captain William Hilton in 1663.

The Baynard Plantation, built by Revolutionary War hero Captain Jack Stoney in 1793, was used as the HQ for the Union troops and was later burned to the ground. Visitors to the island today can still tour the ruins of the grand antebellum home and slave quarters on a short hike through Sea Pines Preserve.

By early 1950, Georgia timberman Fred Hack had discovered the acres of loblolly pine and live oak trees on Hilton Head and, along with JB Fraser and other investors, set up the Hilton Head Company and began to buy up acres of land to harvest lumber. Lumber mills were built and, after harvesting millions of feet of lumber, Hilton Head Company began selling off lots along the beach for vacation cottages.

The modern age of Hilton Head Island began with Charles Fraser, son of J. B Fraser. Charles had a vision to preserve the plantation history and natural beauty of the island and build an eco-friendly, resort community on his family land dominating the southern tip of the island. The first car ferry arrived in 1953, a grocery store opened at Coligny Circle in Forest Beach, and the James F. Byrnes swinging bridge was built in 1956, finally connecting Hilton Head Island to the mainland.

Fraser’s vision for a world-class resort became a reality and a model for future resort communities across the US. Sea Pines Plantation was a stunning natural oasis with classic Lowcountry architecture and beach homes, untouched forest preserves, 5-miles of sandy beaches, championship golf courses, and the signature candy-cane Harbour Town Lighthouse. Shipyard was the second plantation to be developed on Hilton Head, followed by Port Royal and Palmetto Dunes.

Hilton Head Island is home to two lighthouses: The historic Leamington Lighthouse built by Union Troops in 1879 which overlooks the Arthur Hills Golf Course in Palmetto Dunes and the iconic Harbour Town Lighthouse in Sea Pines Plantation, built by Charles Fraser as a fun and memorable landmark and museum dedicated to the history of Hilton Head Island. The 90-ft lighthouse features ten levels of fascinating photos and artifacts, a Coast Guard Exhibit, a one-of-a-kind gift shop and views all the way to Tybee Island!

The Coastal Discovery Museum is situated on the historic Honey Horn plantation, dating back to before the Civil War. The museum is home to nine historical buildings, the Santa Elena Center highlighting the history of 16th century Hilton Head, and 68 acres of beautiful grounds with nature trails, butterfly gardens, and an ancient 500-year old Southern Red Cedar. The Coastal Discovery Museum offers guided history tours of Hilton Head Island, the Forts of Port Royal and the habitats and history of Pinckney Island.

Venture beyond Hilton Head Island to learn more about the history of the Gullah culture on a boat tour of Daufuskie Island or take a cruise of Savannah’s historic port and riverfront.

Tee off for a round of golf at the Robber’s Row Course set atop former civil war grounds with interpretive markers on several holes describing the historic events that took place at Port Royal.

Travel through the communities of Hilton Head Island on a two-hour narrated bus tour with native Gullah residents. The tour is fun, interactive and covers the top historic Gullah attractions on the island including the Gullah Museum, a tiny museum dedicated to preserving the Gullah-Geechee heritage and culture.

Locally serving Hilton Head since 1993, Sunset Rentals are one of the most experienced vacation rental companies on Hilton Head Island. Our portfolio of 220+ vacation homes and villas are situated in the top resort areas of Hilton Head Island with luxury vacation amenities and a 24/7 guest concierge from our local team.

Take a tour of the resort areas of Hilton Head Island, browse our collection of luxury rentals (many including bike & beach gear credit valued up to $350!), and book your vacation with confidence and ease with Sunset Rentals. 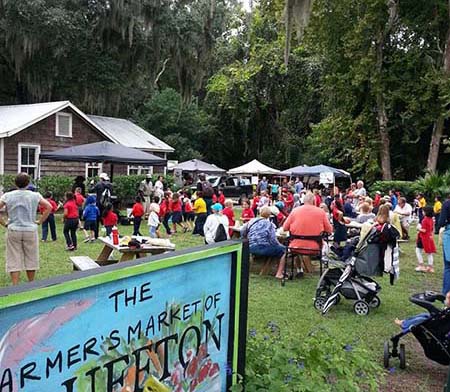 Support local businesses here in the Lowcountry by visiting a Farmers Market to stock up on fresh groceries and new products. Whether you’re looking to pick up some dinner items for a home cooked meal in your vacation rental or wanting to bring home some knowledge and practice, a Farmers Market is the perfect place to visit on your next vacation to Hilton Head Island!

The Hilton Head Farmers Market is held every Tuesday from 9:00 AM to 1:00 PM at the Coastal Discovery Museum’s Honey Horn campus. Stop by to purchase local produce, seafood, meats and more while you enjoy unique vendors, food trucks, and live entertainment.

Every Tuesday starting March 15th through November 22nd, from 10:00 AM to 2:00 PM at The Shops at Sea Pines Center. You can find seasonal fruits and vegetables, freshly caught seafood, baked goods, barbecue, and artisan crafts!

The Root and Bloom Market

A year round market every Saturday from 9:00 AM to 12:00 PM. Enjoy local organic produce and learn about the impact your health can have on your physical and emotional wellbeing.

Every Saturday year round from 9:00 AM to 12:00 PM rain or shine. Experience fresh local produce, meats, seafood, prepared food vendors, plants, and more.